NOTICE: As a part of Indiana University upgrades, materials on this page have been moved from an old web site. Please note the new URL https://anthkb.sitehost.iu.edu/, and update your links to reflect this new site. 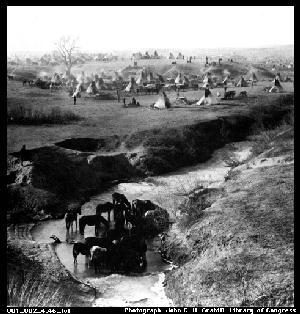 A Lakota (Plains Sioux) camp, mid 1800s. The arrival of the horse in the 1600s dramatically changed Plains Indian life. Larger groups could be supported by mounted hunting of the vast bison herds, and by 1750 many groups like the Cheyenne and Kiowa had migrated into the Plains to take advantage of the new subsistence opportunities.

"Anthropology" is the study of humans. This is a broad area, and many other disciplines such as psychology, sociology, biology, and medicine also have an interest in humans, and there is a lot of overlap between these academic disciplines. So what is different about Anthropology? American Anthropology has had a unique perspective on the human experience for over a century. This includes three predominant views:

BREADTH: Anthropologists look at people across a broad spectrum of space and time. Bioanthropologists examine our human biological and behavioral heritage over millions of years, and consider human physical variations across the world's populations. Archaeologists study the development and distribution of cultural patterns in past groups and civilizations, and seek to understand the ecological and social forces affecting these patterns over thousands of years. Cultural anthropologists examine human behaviors in contemporary groups in every setting across the world, and seek to understand the ecological and social forces that shape these behaviors. Anthropologists in every field are also concerned with change, both biological and socio-cultural, and how change impacts upon the human experience of us all.

HOLISTIC SYSTEMS: Anthropologists also look at the human experience in terms of holistic integrated systems. Human behavior is seen in the context of how biological, ecological, and cultural systems interact with each other. Some are interested in how our biological heritage provides us with the potentials for learned behavior, how our cultures shape these potentials into the wide variety of ways humans can be human around the world and across time, how our cultures optimize (and sometimes jeopardize) our ecological conditions for our long-term adaptation (or maladaptation), and how people from different cultures can understand and interact with each other. They are also concerned with how these lessons can be applied in our own society today.

GROUPS: Anthropology generally focuses on human groups. While individuals are important, they are usually considered in the aggregate, because the comparisons made in Anthropology are so broad. For example, some anthropologists may be interested in how CroMagnon homo sapiens developed in their capacity for learning, subsistence, susceptibility to diseases, and biological adaptations compared to homo erectus. Others may be interested in how Eskimos adapted biologically and culturally to the Arctic environment compared to the !Kung bushmen in the Kalahari desert in southwest Africa. And others may be interested in how matrilineal societies compare in their religious beliefs and practices compared to patrilineal societies. There are many variations within all groups, of course, but by comparing group patterns across different settings, we can gain broad perspectives on the human experience.

ARCHAEOLOGY: Archaeology is the study of past (and sometimes present) cultures through their material artifacts. This includes examination of patterns in the shape, use, and distribution of material culture to reconstruct social and behavioral systems of prehistoric and historical groups, such as the precolumbian Maya of Mesoamerica and 19th century African Americans of Indianapolis. Archaeologists seek to explain how these patterns became established and how they changed over time. They are also concerned with how the study of prehistoric cultures can benefit local groups who now live in the same areas as those past societies.

CULTURAL ANTHROPOLOGY: Cultural Anthropology, or Ethnology, is the study of contemporary human cultures. This involves description of the many ways of being human in today's world. This approach emphasizes first-hand field experience and understanding other groups from their own meanings, perspectives, and conditions, and also how ethnic patterns help people adapt to their environmental challenges. Ethnologists also seek to understand how different aspects of culture are interrelated, such as how religious beliefs are integrated with economic productiveness and the maintenance of public health. Cultural anthropologists have also been involved in community development, international health, mintercultural relations, and the design and delivery of social programs, as well as working with community groups seeking constructive social changes.

LINGUISTICS: Linguistics is the study of human languages and communication. Linguists have studied thousands of unwritten languages around the world, and have investigated such issues as how language reflects cultural realities, ethnic and social behavior, and cognitive development. Linguists have also been involved in assisting immigrant and refugee groups in learning to communicate in their new homelands.

Many issues of concern to anthropologists cut across these different subfields. For example, in investigating the effective delivery of health care across ethnic lines, cultural anthropologists may investigate the influences of group beliefs and social roles in the acceptance of new medical practices, archaeologists may study past diseases and group adaptations to these maladies, bioanthropologists may examine genetically-fixed resistance to pathogens in the ecological setting, and linguists may study cognitive structures in concepts of illnesses and communication patterns between medical providers and patients. Archaeologist and bioanthropologists may collaborate in investigating the health patterns of prehistorical cultures and how these are related to the development of agriculture, and they in turn may work with cultural anthropologists in comparing prehistoric subsistence with historical hunting-gathering and agricultural groups.

© Ken Barger, 2019.
These materials may be used in your own personal research and learning, though I'd appreciate your giving me credit where appropriate.