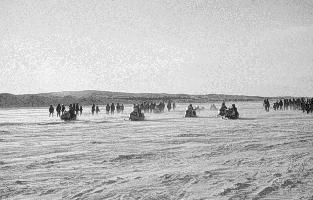 A snowmobile race sponsored by the Inuit (Eskimo) community council in a village on the Hudson's Bay in the Canadian Arctic. Inuit friends urged me to join in a snowshoe race across the river ice, but, knowing I was inexperienced at this, I was reluctant to participate. They persisted, however, and, recognizing that they wanted me to be involved, I agreed. Of course, I was the last one to return, way behind everyone else in the race. I was very embarrassed, but to my surprise, people came up to me and congratulated me, saying, " You really tried!" A month later, when I was on a caribou hunting trip with three Inuit men in a remote area, we got trapped by a winter storm and had to go several days without food. This was when I learned that trying was much more important than winning. While the Inuit like to win, their greater value on trying has a distinct adaptive function. One way anthropologists learn about other cultures is "participant observation," being involved in their daily life, watching what they do, and doing what they do. We seek to learn the meanings and (more important) the functions of their ways. We are also involved in "cross-cultural comparison," comparing their life experiences with other groups (mostly our own). In the case of the snowshoe race, I learned about Inuit values on trying, but I also learned about American values on competition and winning.

What's Wrong With This Picture?

A statue in the town square of an Indiana town, next to a historical plaque stating that this area was part of the Godfroy Reserve of the Miami Indians. The Miami were a Eastern Woodlands people, with a distinctive culture, language, and history. Yet the "Indian" depicted here is based on a misconception of Plains Indians, as with the headdress. Also, note the 'totem pole,' a unique trait of Northwest Coast Indians, not at all related to the Eastern Woodlands or the Plains. This statue (which was originally used by a car dealership) reflects EuroAmericans' misunderstandings and stereotypes about American Indians.

The goals of this course emphasize an understanding of the tremendous diversity among American Indians, an awareness of Native Americans today, and developing our skills in recognizing and controlling for ethnocentrism. We then will be far better prepared to develop valid understandings about American Indians on our own.

What Is the E320 Course About?

Wedlidi Speck, a Kwag-ul (Kwakiutl) hereditary chief, from British Columbia, explains the meanings of Kwakiutl legends and symbolism to IUPUI Anthropology students. Behind him is a print of one of his paintings depicting traditional themes along with his interpretations for contemporary life. He has generously donated traditional designs to be used on Anthropology Club t-shirts and sweat shirts.

E320 North American Indians is a survey of North American native peoples, including the expansion of humans into the New World, historical cultural styles, and Native Americans in our society today. I have often asked Native Americans on what they think this course should focus, and the common themes are that there are many differences among their historical and cotemporary heritages and that they are here today (not peoples of the past). So these views will be central to this course, as we try to understand Native Americans from their perspective, rather than as others (ie, non-natives) see them.

The course structure, objectives, and requirements call for a background in Anthropology, particularly the key concepts that can help us in understanding peoples of other cultural backgrounds: culture, ethnocentrism, human adaptation, and cultural change. Course materials cover these concepts, and you are asked to print these, study these ideas, and bring the materials to class, so we can utilize these ideas in class discussions.

The goals of the course are to understand the diversity of Native Americans, to appreciate the views and roles of American Indians in contemporary American society, and to recognize and control for ethnocentrism, which can lead us to misunderstand American Indians and the broad potentials all humans have for meaningful cultural experience. The course will also emphasize development of our learning skills that we can take with us beyond the class, so we will know how to learn whatever we need to know about specific cultural groups and social events and about human behavior in general.

In a larger sense, we will also develop our skills to understand the life experiences and functions of ethnic experiences of other human beings in general. This will probably be the most valuable ability as we go through life.

I look forward to working with you this semester!

* No personal information is collected on this and other course-related pages.